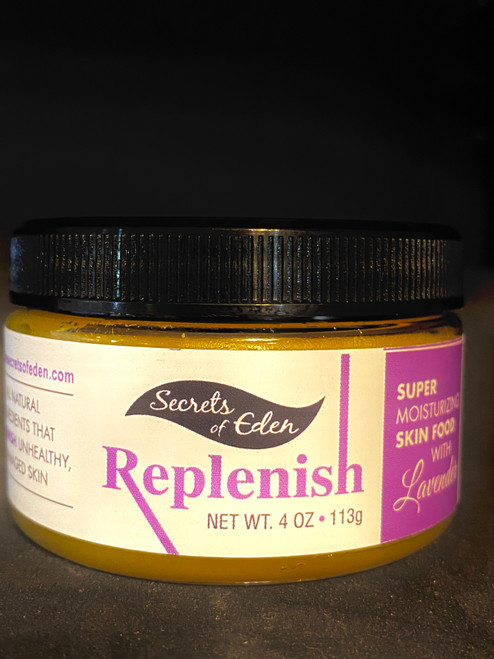 Nurses and doctors love it!

What makes Replenish so special?

The research department at The Secrets of Eden discovered the amazing synergistic powers within these three ingredients when experimenting with another product idea and co-incidental to that, Replenish was born.What a discovery that was!

The first people to use Replenish rejoiced at how it seemed to increase the circulation of their blood and hence provoked a rosy and healthy glow to whatever skin it was applied to.

Others with dry skin conditions reported that an immediate smoothness and softness was imparted.Still others found that Replenish worked wonders in conjunction with warm water baths and hot washcloths applied to the face.

Replenish works wonders and why shouldn’t it?

Three of the healthiest, most skin compatible ingredients known to man, with histories dating back 1000s of years combined via The Secrets of Eden’s exclusive process cannot fail to produce excellent results.

1.  Organic Golden Jojoba Oil Jojoba oil is ideal for any imbalance in the skin. This includes, psoriasis, eczema, and cradle cap in infant hair & as a scalp repair skin emollient.
Jojoba oils fatty acid profile most closely mimics the naturally occurring sebum of the skin. Thus, Jojoba oil is one of the most easily absorbed vegetable oils by the body and therefore is a marvelous vehicle for transporting the miraculous healing properties of the other two main ingredients.

2. Raw Unpasteurized Honey   Made famous by Cleopatra, honey and milk baths are timeless standards of beauty enhancement, and for good reason.

Selected honey used in Replenish is high in antioxidants and include pinocembrin, pinobanksin, chrysin and galagin. Pinocembrin is unique to honey and found in the highest amount relative to the others. Ascorbic acid (vitamin C), catalase and selenium are also present. Researchers at the University of Illinois Champaign/Urbana examined the antioxidant content (using an assessment technique known as Oxygen Radical Absorbance Capacity or ORAC) of 14 unifloral honeys compared to a sugaranalogue. ORAC values for the honeys were significantly greater than that for the sugar analogue.

Raw Unpasteurized Honey is highly antibacterial. Most of the antibacterial activity of honey occurs due to hydrogen peroxide generation.

Other researchers have identified the flavinoids in honey, particularly caffeic acid and ferulic acid,

as the most likely contributors. Honey has antimicrobial properties that discourage the growth or persistence of many microorganisms.

No vegetative forms of disease-causing bacterial spores have ever been found in honey.

Raw Unpasteurized Honey is rich in vitamins and minerals.

Replenish infuses the wonder-working power of God’s perfect golden food for your skin. You absorb its powers transdermally.

But that’s not all!

Replenish is rich in Lecithin.

Lecithin, known chemically as phosphatidylcholine is found in virtually every cell of the body.

Phosphatidylcholine (hereinafter referred to as Lecithin) is important for normal cellular membrane composition and repair. Lecithin is also the major delivery form of the essential nutrient choline. Choline itself is a precursor in the synthesis of the neurotransmitter acetylcholine.Lecithin’s role in the maintenance of cell-membrane integrity is vital to all of the basic biological processes. In other words the information flow that occurs within cells from DNA to RNA to proteins; the formation of cellular energy and intracellular communication or signal transduction.

Lecithin has a marked fluidizing effect on cellular membranes. Decreased cell-membrane fluidization and breakdown of cell-membrane integrity, as well as impairment of cell-membrane repair mechanisms, are associated with a number of disorders, including liver disease, neurological diseases, various cancers and cell death.

Lecithin may be indicated to help restore liver function in a number of disorders, including alcoholic fibrosis, and possibly viral hepatitis. It may also be indicated for the treatment of some manic conditions.

There is some evidence that Lecithin may be useful in the management of Alzheimer's disease and some other cognitive disorders.

is also suggested by recent research. It may also be indicated in some with tardive dyskinesia. There has been hope, for some time, that Lecithin would demonstrate clear-cut benefits in cognitive disorders, such as age-related memory loss and Alzheimer's disease. There are a few reports that supplemental choline can improve short-term memory skills and enhance the memories of those who are initial poor learners.

Those with Alzheimer's disease have a diminished ability to synthesize and/or utilize the neurotransmitter acetylcholine, particularly in those areas of the brain related to memory, thus the hope that supplemental choline/phosphatidylcholine might be of benefit. A few studies have suggested some small benefit in memory restoration, but most have not. Research continues.

Recently it has been suggested that Lecithin might eventually have some therapeutic role in some cancers. Animal studies indicate that deficiencies in choline and phosphatidylcholine may disrupt cell membrane signal transduction in ways that could lead to various cancers. There is ample evidence that liver cancer is promoted in various animals by choline-deficient diets, and it has been shown that excess choline can protect against liver cancer in a mouse model.